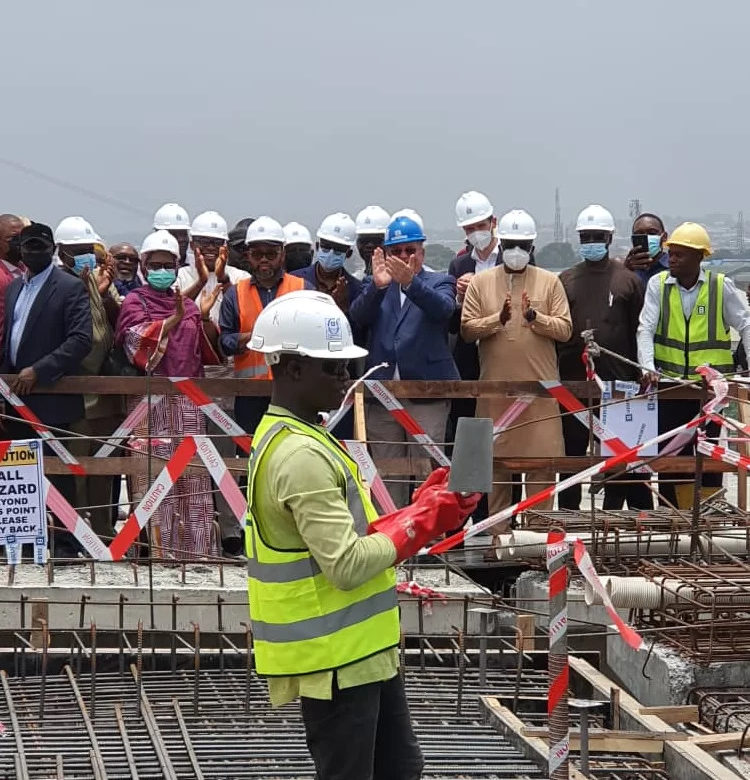 “Julius Berger has brought some very unique innovations in the construction of this Project and I want to on behalf of the Government and people of Nigeria applaud the skills of the construction workers that have been working on this site…and through the project, the Federal Government has been able to create about 20,000 jobs at the construction site.”- Minister of Finance, Budget and National Planning, Mrs. Zainab Ahmed

The Federal Government last Saturday in Onitsha once again applauded the nation’s infrastructure construction leader, Julius Berger Nigeria Plc, for the company’s uncommon and productive commitment to successful projection implementation as well as for its engineering genius, which the government called ‘excellent’.

The Minister of Finance, Budget and National Planning, Mrs. Zainab Ahmed, who was visiting the 2nd River Niger Bridge project to see the extent the works had progressed also witnessed the history-making final concrete casting  that connected the last span of the bridge to technically complete the construction of the bridge by Julius Berger.

Mrs. Zainab Ahmed also hailed the Nigerian Sovereign Investment Authority, (NSIA) over its work on the second Niger Bridge. Other senior government officials on the honourable Minister’s entourage to the project site included the Chairman, Board of Directors of the Nigerian Sovereign Investment Authority, Mr. Farouk Gumel, and the NSIA Managing Director, Uche Orji. The Deputy Governor of Anambra state, Gilbert Onyekachukwu Ibezim, also joined in inspecting the Project. The Minister’s visit is the second in approximately three weeks, coming after President Muhammadu Buhari, represented by his Chief of Staff, Professor Ibrahim Gambari, also conducted an inspection visit to the project works. The Project, which is under construction by Julius Berger Nigeria Plc, is being administratively oversighted by the NSIA with funding from the Presidential Infrastructure Development Fund (PIDF).

Speaking shortly with the media after the inspection, the Minister described the second Niger Bridge as a very significant project for the Federal Government, because of the geo-integrative and huge developmental impact, which the project would have on the socio-economic lives of Nigerians. She expressed satisfaction with the timely pace and premium quality of the job done by Julius Berger under the committed administrative oversight of the NSIA.

In the words of the honourable Minister, “Today is a very significant day in the construction circle of the Second Niger Bridge. This is one of the most iconic Projects in the Country … the significance of today is that the two ends of the Bridge are being put together, and this is the final phase of the work in truly completing the project and finishing the work. Technically, I can report to Mr. President that I have seen where all the billions have gone. This is a Project that is very dear to the President and it is designed to uplift the lives and livelihood of people of the South-East and other parts of the Country.”

The minister further said, “We hope that when this Project comes on stream, it will ease traffic, enhance commercial activities and improve the lives of the people.

Turning to the Julius Berger project director for the 2nd River Niger Bridge, the honourable Minister said, “Wieser, congratulations for an excellent job done on this project by you and your workers. You have justified our investment in this project. Well done. We shall visit you again, soon, when we shall escort the President, Muhammadu Buhari  to commission this significant bridge.”

Commenting on the Project, also, the Chairman of the Nigerian Sovereign Investment Authority (NSIA), Mr. Farouk Gumel, also expressed satisfaction with the implementation of the project. Gumel said, “…the (NSIA) Board is pleased with the quality and pace of work. Undoubtedly, the 2nd Niger Bridge is a vital piece of national infrastructure. At completion, we expect that it will serve as an enabler to cross-regional economic activities and stimulate growth on a national scale.”

In his remarks at the event, the NSIA Managing Director, Mr. Uche Orji, said, “…the Presidential Infrastructure Development Fund (PIDF) is a special fund set up by President Muhammadu Buhari, and is managed by the NSIA. The NSIA brought some of its own capital and the capital provided by FG.” Other projects funded by the PIDF include the ongoing Abuja-Kaduna-Kano Road (AKR) and the Lagos-Shagamu Expressway (LSE) projects.