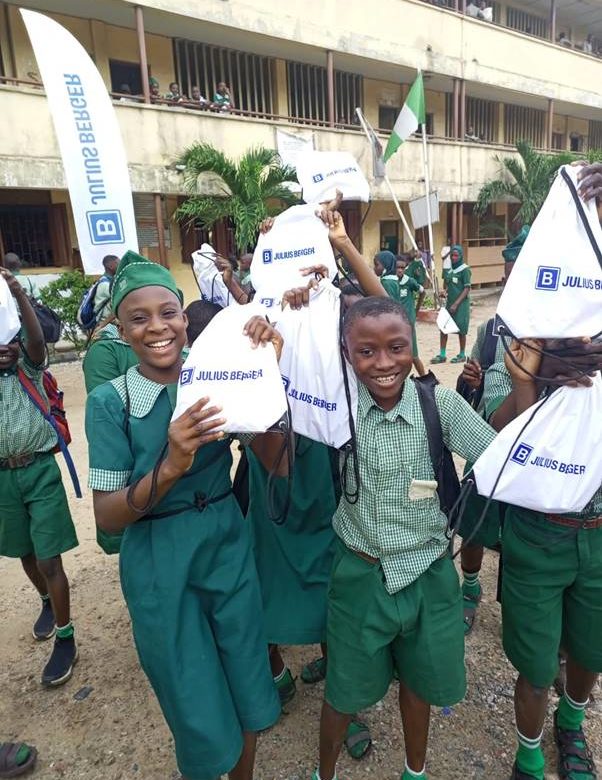 It was excitement galore during the week, when the nation’s engineering construction frontrunner, Julius Berger Nigeria Plc, hiked up its Corporate Social responsibility efforts by donating literary materials to students in Lagos and Ogun state schools. The effort was designed to fulfil its contributory obligations to communities in its operational environment.

At Iponri Estate Junior High School in Lagos State Wednesday, no fewer than 600 students got a bag each of the literary materials comprising writing materials and an award winning African-based science fiction and fantasy written work, What Sunny saw in the Flame authored by Nnedi Okorafor.

In applauding Julius Berger’s effort, the Vice Principal of the school, Mrs Lydia Omowumi Adenigba who stood in for the Principal said, “…we appreciate Julius Berger for this laudable effort. It has been long we saw such an effort from any organisation operating in Lagos. We will no doubt cherish this day for a long time to come. Thank you Julius Berger. We so much appreciate you”

The Head Boy of the school, Master Olatuyi Timilehin spoke in similar vein adding that, “we know Julius Berger as a construction company, building bridges and roads and houses. However, today, we have seen another good thing your company does; that is promoting education. Thank you Julius Berger for this and many more social works that you do.”

Earlier, leader of Julius Berger Team to the event and Head of the company’s Corporate Communications Department, Mr. James Agama, told the students the essence of the CSR effort. He said, “Julius Berger not only builds bridges, houses and roads. We also build the future of children by promoting the educational development of students in areas where we operate. We promote your education to prepare you for future challenges.”

Next day, at the Community High School, Ibafo, Ogun State, it was a replay of same scenario as no fewer than 650 elated students sang and danced with their respective bags containing the educational materials.

Ibafo is situated east of Magado, and east of Magboro-Shofolarin on the Lagos-Shagamu Expressway.

In his vote of thanks, Vice Principal of the school, Mr. Olaniyi Olusola thanked the company for the gesture saying, “…this is a very worthy effort by your company to uplift the education of our students. We appreciate Julius Berger; Tell your management that we will be supporting them in our prayers always.”

It would be recalled that Julius Berger’s laudable and continuing CSR Literacy Campaign also took the company’s books and writing materials donation to schools at the Federal Capital Territory Abuja recently.